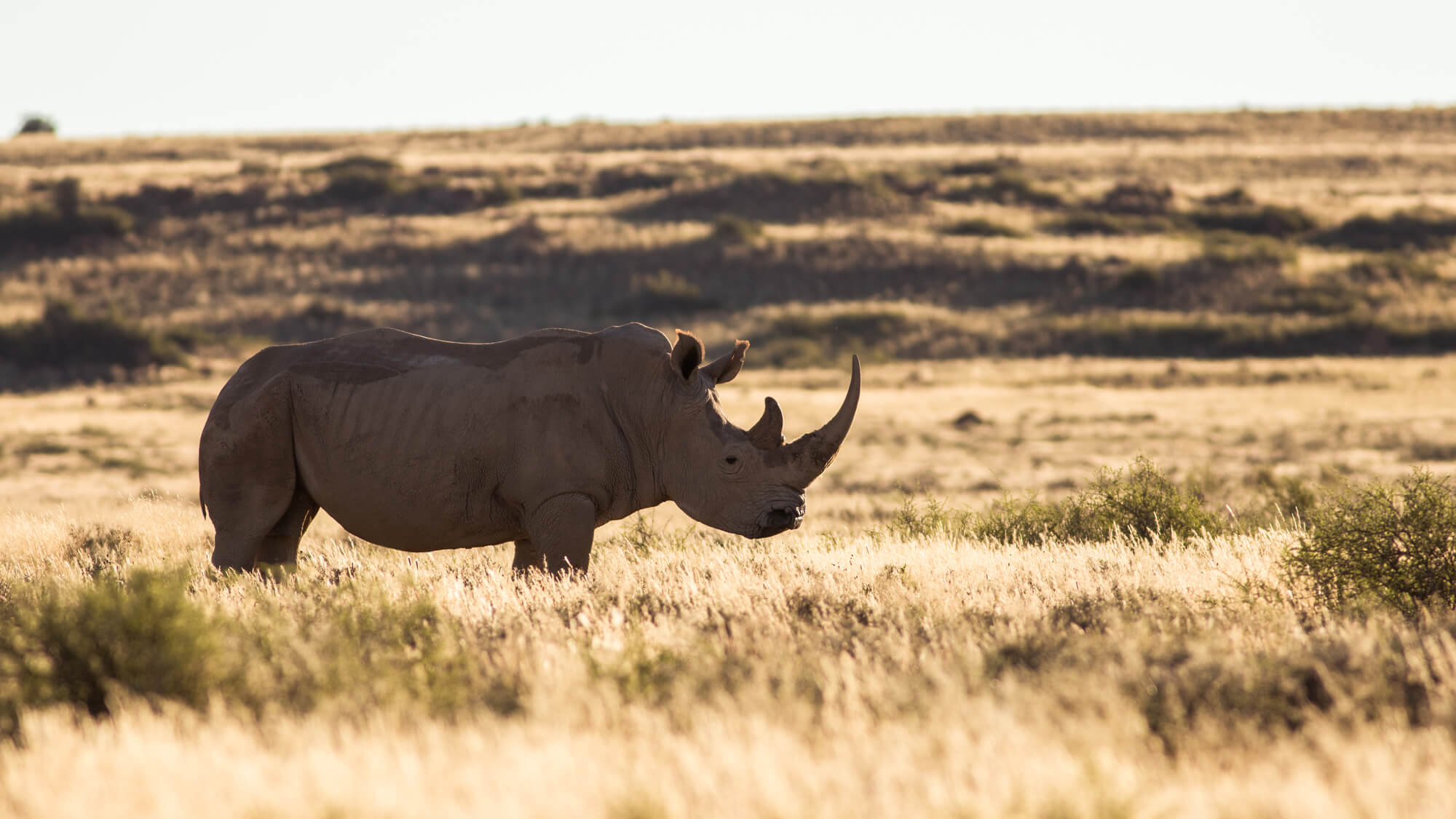 These mammals are easily recognised by their prehistoric features and the horns on their forehead. Rhinos are bold and have been seen to graze right next to Lions, with the Lions being equally un-fazed. Poachers are greatly responsible for the decreasing Rhino population.

These mammals are easily recognised by their prehistoric features and the horns on their forehead. Rhinos are bold and have been seen to graze right next to Lions, with the Lions being equally un-fazed. Poachers are greatly responsible for the decreasing Rhino population.

Rhinos sleep standing up or lying down and can sleep up to 8 hours a day at intervals. They can be found dozing under a tree during a hot day, but when they take a deep sleep, they lie down with their feet curled up slightly to the one side. They sleep very deeply and can easily be approached.

During the heat of the day Rhinos will rest up in shade or find a mud wallow. The mud not only cools them down but protects the skin against parasites and the sun. Rhinos tend to move around more during the night when it is cooler and more bearable. They will also drink water whenever available.

Rhino horn is not made up of compressed hair as once thought but rather keratin (the same material that makes nails, claws and hooves). The horn is sought after for its supposed medicinal purposes. In Yemen the horn is used for dagger handles that are presented to young boys reaching into manhood.

Bulls weigh up to 1 200 Kg and cows about 800 Kg. As such this species is smaller than the White Rhino. It can further be distinguished from the White (or square-lipped) Rhino by the pointed upper-lip. Other than the White Rhino, the smaller head is usually held high. The ears are trumpet-like and more rounded. The soil in which it rolls, partly determines the skin colour.

Being a browser, it feeds on trees, bushes and herbs. Only when under nutritional stress will it consume grass. Branches and twigs are grabbed with the hooked upper lip, pulled into the mouth, and then sheared off with the molars, and masticated. This 'pruning' of bushes allowed ecologists to conduct detailed studies of feeding patterns and preferences.

Mating is non-seasonal. During courtship behaviour, males butt females with their horns. Mating can be quite a violent and protracted event. Cows give birth for the first time at the age of 5 or 6 years.

Running, it can attain a speed of up to 55 km/h. White Rhino dung middens are sometimes covered by the Black Rhino with it's own dung. Size of bull territories are largely determined by the availability of food and water supply. Young bulls straying into the territories of dominant bulls may be killed. Bulls are solitary, and will only spend time with a female in an oestrus cycle.

The African population declined from about 65 000 in 1970 to a mere 2 400 in 1995, when the last count was conducted. Most of the world's Black Rhino population occurs in South Africa, Namibia, Kenya and Zimbabwe. This species is now considered to be seriously threatened. Complicating conservation efforts, is the fact that four subspecies are acknowledged within the distribution range of the Black Rhino. Of D.b. bicornis, small populations are re-established in southwestern South Africa, of D.b. michaeli, a trans-located population is established in the Addo Elephant National Park, South Africa. D.b minor occurs in the northern and eastern parts of South Africa.

The White Rhino is the third largest land mammal. Massive, stocky, and with a reputation of being not quite as aggressive as the Black Rhino. The two distinctive horns are in fact very densely packed fibers, and materially not really horns. The record horn length is 1.58 m. Bulls, weighing up to 2 000 kg, are larger than cows which weigh up to 1 800 kg. Bulls are 1.8 m at the shoulders. The grey skin is almost hairless. They have a square-shaped, wide mouth. White Rhinos have a hump on the neck. The penis points backwards and testes are located abdominally.

The White Rhino is strictly a grazer. Favouring short grass, but will feed on taller grass when short grass is not available. The wide mouth enables adequate intake with each plug harvested with the upper and lower lips.

Even though most conceptions take place during the wet season, this huge mammal is not a strict seasonal breeder. Calves are born early in the dry season after a gestation period of 16 months, and stays with their mothers for a period of two to three years, until she gives birth to her next calve. Cows starts breeding at about eight years and bulls reach sexual maturity at 10-12 years. During mating, sexual activity can last more than an hour.

In spite of their bulk and short stubby legs, White Rhino can run remarkably fast, but only for very short distances. Dominant territorial bulls occupy mutually exclusive areas of two to five square kilometers, but one or more subordinate bulls may share the territory. Female ranges may overlap those of several bull territories. A territorial bull will attempt to confine a receptive cow to his territory, and will join her for five to ten days prior to mating.

Formerly widely distributed throughout the bushveld regions of South Africa. In the 19th century it was exterminated by hunters, except in KwaZulu-Natal's Umfolozi region. Although now thriving where it has been re-introduced into parts of its former region, it still suffers from poaching.