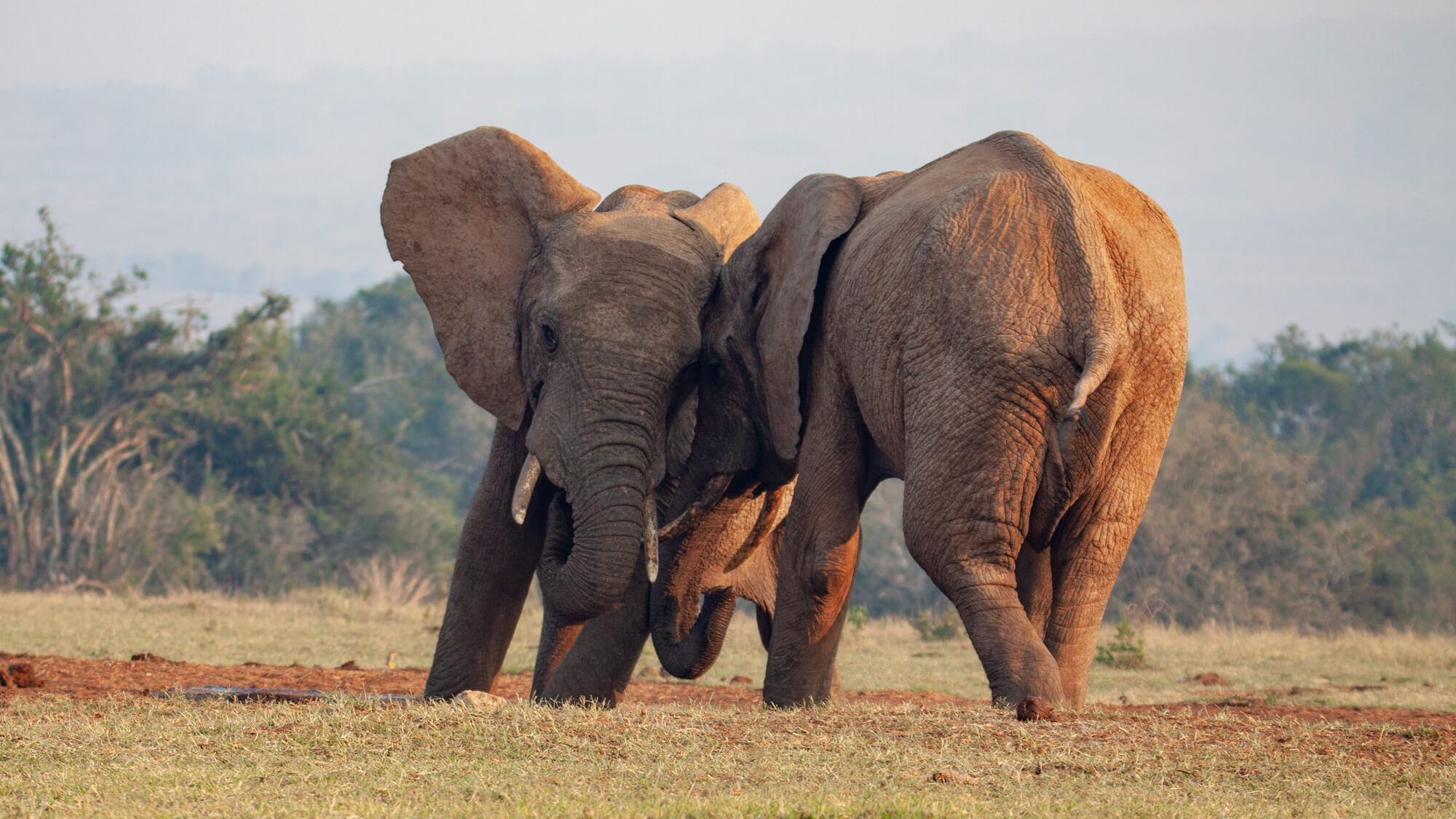 The Elephant is the world's largest land mammal, and weighs up to 7 tonnes and reaches heights of 3.3 m at the shoulder. Elephants can live to a potential age of 70 years. The massive tusks of older bulls can weigh up to 50 or 60 kilograms, but tusks weighing up to 90 kilograms have been recorded.

The Elephant's trunk is a modified nose which is very sensitive and can even detect water under ground. There are as many as 50 000 muscles in an Elephant trunk. The sensitive finger-like appendages at the tip of the trunk enables them to pick the smallest twig or flower, pull the toughest reed of grass or even pick out a thorn from their feet.

The joints that are perceived as 'knees', are in fact wrists. This is a common misunderstanding due to the belief that a leg joint that bends between the foot and the body must be a knee. The main difference between us and the elephants is that our foot bones and hand bones are separate, whereas those of the elephant are one in the same, and have evolved to suit this four-legged mammal.

The tusks are used for obtaining food, fighting (amongst males) and for self defence. They are actually their upper incisors, and grow continuously until they die at around 60 years old. Although their skin is up to 3cm (1 inch) thick, it is quite sensitive.

Elephants are voracious feeders which in a day consume up to 272 kg (600 pounds) of grass, tender shoots and bark from trees. An adult Elephant can drink up to 200 litres of water in a single session. A single Elephant deposits up to 150kg (330 pounds) of dung every day - about one dollop every 15 minutes!

African Elephant are not seasonal breeders. Generally they produceone calf every 3 to 4 years. The gestation period is about 22 months. At birth calves weigh about 100 kg (220 pounds) and are fully weaned between 18-24 months. An orphaned calf will usually be adopted by one of the family's lactating females or suckled by various females. Elephants are very attentive mothers, and because most Elephant behavior has to be learned, they keep their offspring with them for many years. Tusks erupt at 16 months but do not show externally until 30 months. Once weaned, usually at age 4 or 5, the calf still remains in the maternal group. Females mature at about 11 years and stay in the group, while the males, which mature between 12 and 15, are usually expelled from the maternal herd. Even though these young males are sexually mature, they do not breed until they are in their mid, or late 20s or even older and have moved up in the social hierarchy.

It was once thought that family groups were led by old bull elephants, but these males are most often solitary. The female family groups are often visited by mature males checking for females in oestrus. Several interrelated family groups may inhabit an area and know each other well.

How do you tell an elephant's mock charge from a serious one?

It is imperative to keep in mind that Elephant are extremely intelligent, and each individual has a distinct character. Although there will be exceptions to the rules, the common signs of a mock charge are bush-bashing, dust-throwing, trumpeting and other vocalizations, open ears and an intimidating presence, can be considered a mock-display. Aggressive or startled elephants usually make sudden headshakes and flap their large ears against their head. Serious charges usually occur after all attempts to intimidate have failed, and the Elephant feels threatened. The ears are pinned back and head and trunk are lowered. Ultimately, the key lies in the intelligence of the animal and how they will react to the 'target' and unfamiliar actions, and a conscious decision is made.

Why elephants flap their ears

Contrary to common belief, it is not an expression of anger. Being an animal of such a large size, with no sweat glands and a dark body colour, elephants flap their ears to cool the body and rid themselves of irritating insects.